I continue to be amazed at how frequently barn doors are appearing in interior design.  This is a trend that simply has not gone away.  Today designers are coming up with more and more creative uses for interior barn doors — and some are even making bold statements with color.  Barn doors aren’t just being used as room dividers any more.

Barn doors are being used to hide kitchens…

Barn doors are being used to hide bathrooms…

Barn doors are being used to hide mudrooms…

Barn doors are being used to hide laundry rooms…

And barn doors don’t even have to look like barn doors anymore.   Reclaimed doors mounted with barn door hardware can make a great statement in any space.

One of the most appealing aspects  of interior barn doors is that they are not difficult to install.  Taking up less floor space than a traditional swinging door, and requiring less interior wall manipulation when installing than a more traditional pocket door, the barn door simply glides along a track that’s mounted to the wall above the door opening.   A barn door in an interior can also add a rustic or industrial feel to an otherwise traditional space.  Installing an interior barn door is a great example of the type of unexpected design element that can add interest to any space.   Have you ever considered adding one to your home?

When the April issue of House Beautiful  arrived, I was excited to see that this month’s featured designs reflected a celebration of “the best traditional style now.”   I waited until I could find a quiet moment to savor every page, and when I saw this kitchen designed by Connie Newberry of Gerald Bland, Inc., I knew I had to write about it.  There are just SO many things to love about this beautiful space.

How do I love thee?  Let me count the ways!

Who says traditional has to be old-fashioned?  I think today’s “new traditional” is a lasting look.  House Beautiful is definitely onto something!

This week brings good news to fans of designer Nate Berkus.  The Hollywood Reporter has announced that Berkus will host and executive produce a new design competition on NBC called Renovation Nation.  Devotees of the designer were disappointed to see him leave the airwaves when his design show, The Nate Berkus Show, was cancelled last spring, so many are anxiously awaiting his return to television.

Nate certainly has been busy.  News of his upcoming show comes just a few months after he sat down with designer Tory Burch to discuss both the release of his latest New York Times Best-Selling book, The Things that Matter, and his recent collaboration with Target on a line of bed, bath and décor items for the home.  In that conversation they talked about Nate’s design style, which can be best summarized in his own words as “assembled and collected over time.  Not heavy on color, very heavy on layering and texture.”

I think that the kitchen above, which was designed by Nate Berkus, exemplifies this style in how “collected” it looks.  In his design he combines classic elements, such as the parquet floor, crown molding and marble countertop, with more unexpected items such as the windowed partition between the kitchen and living spaces, the use of mixed metals (which has become a much more accepted practice today) and the rolling cart in place of a fixed island.  Most people would have left the kitchen open to the living room, but what Nate did with that window adds so much more character to the space — it’s my favorite element!

I, for one, am delighted that Nate will be returning to television.  I look forward to learning more from him and to being inspired by his design.  We all can take a lesson from Nate’s core design principle that  “your home should tell the story of who you are.  What you love most collected and assembled in one space…the philosophy that things do matter…They represent where we’ve been, who we’ve loved, and where we hope to go.  They make us happy, and I can’t think of a more beautiful way to live than that.”  Thank you, Nate, I agree! 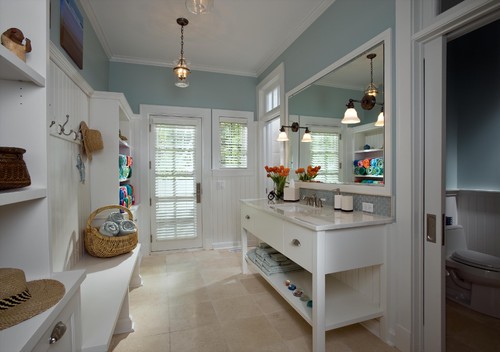 I am intrigued by this powder room set-up.  Truthfully, I’m not sure whether to call it a powder room or a mudroom, but I think the designer might be onto something.  Think about it:  having a sink in your mudroom and then a separate water closet is an interesting use of space that allows for a much larger vanity than you would have in a narrow powder room.    With a sink in the mudroom, there’s no need to step into the bathroom to wash your hands when coming in from outside.  The mirror above the sink is perfect not only for when you’re washing-up, but also for a quick check of yourself before running out the door.  And maybe, just maybe, your young kids might actually brush their teeth before leaving for school in the morning if the sink is by the door.  Well, now maybe that’s just wishful thinking.   In any case, it’s fun when a photo makes you think outside of the box and encourages you to change things up a bit! 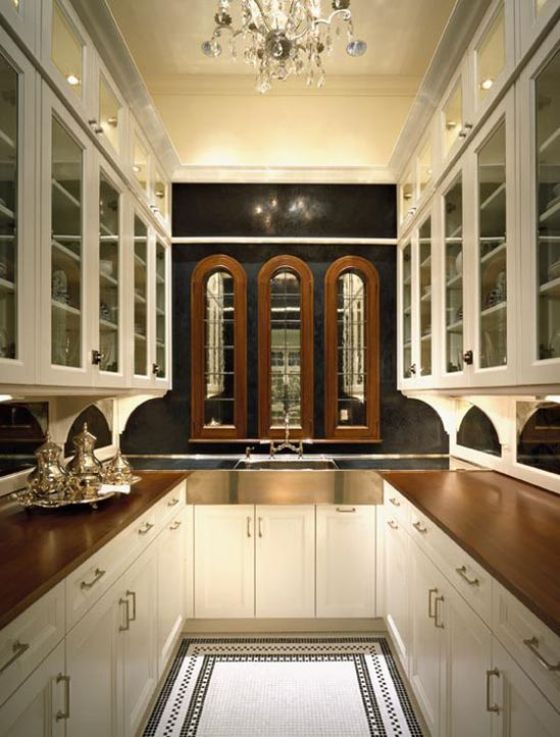 I set out today to write about kitchen pantry storage and I stumbled upon this beautiful image.   After doing some research I realized that I had better qualify just what I mean when I say pantry since there’s quite a big difference between a beautifully designed butler’s pantry and a utilitarian pantry which stores all of the necessary dry goods to feed your family.  But why can’t that utilitarian pantry still be beautiful?  I am a firm believer that your kitchen can be both functional and beautiful, so why not the pantry, too?

While the butler’s pantry above, complete with silver service, would make a lovely addition to someone’s home, today we’ll focus on designing a pantry to store all of the goodies that you need to get meals on the table.  Designing your pantry is just as important as planning for anything else in your kitchen.  It’s important to keep in mind how you’re going to use it and where you’re going to locate it.  Do you have a large or small family?  Do you cook a lot?  Do you entertain a lot?  Do you often buy in bulk?  Do you need to store cookie sheets, small appliances and serving trays here, or do you only have room for food?  And the all-important consideration:  will it be easy to unload groceries here?

As I pondered these questions myself, I realized that many of the pantry images that I love didn’t really meet many of my design requirements.  Often times, the shelves were too deep and items were difficult to find — or the heavy KitchenAid mixer was stored on such a high shelf that it would never be used.  Unfortunately, sometimes when designing a space we pay so much attention to the aesthetics that we forget the function.  So, even though I love a beautiful butler’s panty, I think that the second pantry image would better fit my lifestyle.  And when there’s a place for everything and everything is in its place, then I know I’ve set myself up for success…and that’s beautiful!

There’s something about banquette seating in a kitchen that’s just so inviting.  A banquette carved into a cozy nook under a window is a place that I would want to spend a Sunday morning with a cup of coffee and the paper.  Add some bookshelves, as in the picture above featured in Better Homes and Gardens, and I’d never leave!  Creating cozy spaces where people can sit and eat comfortably encourages people to linger long after a meal is through.  I don’t think my guests would ever leave if I had a banquette such as the one below designed by Jeffrey Bilhuber.  The tufted back cushion and an assortment of beautiful fabrics would be perfect for an elegant space.

A banquette is often employed as a space-saving option, as they are usually tucked away out of the flow of traffic.  Whatever your reason for building a banquette, the sky is the limit when it comes to your style options, since you and your architect and/or builder will likely collaborate on its design.  When building a banquette keep the following guidelines in mind:

When designing your banquette be sure to keep in mind how you plan to use the space.  Will it be for casual meals for adults and/or children?  Will it be a homework station where papers will likely be spread out?  Whether you decide on a banquette with a bench that’s straight, curved or L-shaped, or one where the table is between two benches like a booth, a banquette is a great option which you can design to best accommodate your family’s needs.